I found the build thread that I have referenced twice before. First about the dip in the shell and building it up with body filler, and just recently about how to do the N-Filter!! He has done both awesomely.

I missed your reply about this when I was posting yesterday. I didn't realize you were looking for the thread, haha, I have been using Drjameshouse's build as a reference too. I just went through his N filter posts again. It looks like he didn't go up as close to the cyclotron rings as I did but looks like he has more overhang. The holes in the N filter look to be about the same height from his photos.
~Jay

By PssdffJay -  August 7th, 2014, 12:34 am
-  August 7th, 2014, 12:34 am#4804386
I have 6 days until our drive in screening of Ghostbusters. Time to get my butt in gear. I'm hoping to have my pack painted and assembled and I'll do the electronics later. I was on hold because I didn't know how to mount the n filter. Putty and epoxy? Fiberglass and screw/epoxy? I still need to make sure I can put in the e cig parts so I'm leaning more towards how Letmebleed mounted his. But that's for tomorrow and Friday.

Tonight I attempted to fake an ugly weld to connect the ion arm and the booster tube. I used this photo as a reference which I saved a long time ago. I'm assuming it's a Julz photo since I've stolen every other reference from him.

I cleaned and prepped the parts and then I cut a piece of 1/2" aluminum to the same size as the big resister holes on the ion arm and I "tacked" it in with a few drops of gorilla glue.

I mixed up some Apoxie sculpt and started making little round balls and started placing them on making it look like a weld. And then it just became a big mushy blob. But it IS supposed to be ugly and that it is!

It'll be ok. It's going to be painted and mostly blocked anyway.

I also used some left over and stuffed some into the booster tube to stop the plug from wiggling. I'll put some more from the other side when I take it off to paint.

Looks more like someone stuck used chewing gum in there.

I also filled in some of the chips from the cyclotron holes that were pre cut.

Tomorrow I'll take off the last of the aluminum parts and figure out the n filter conundrum.
~Jay 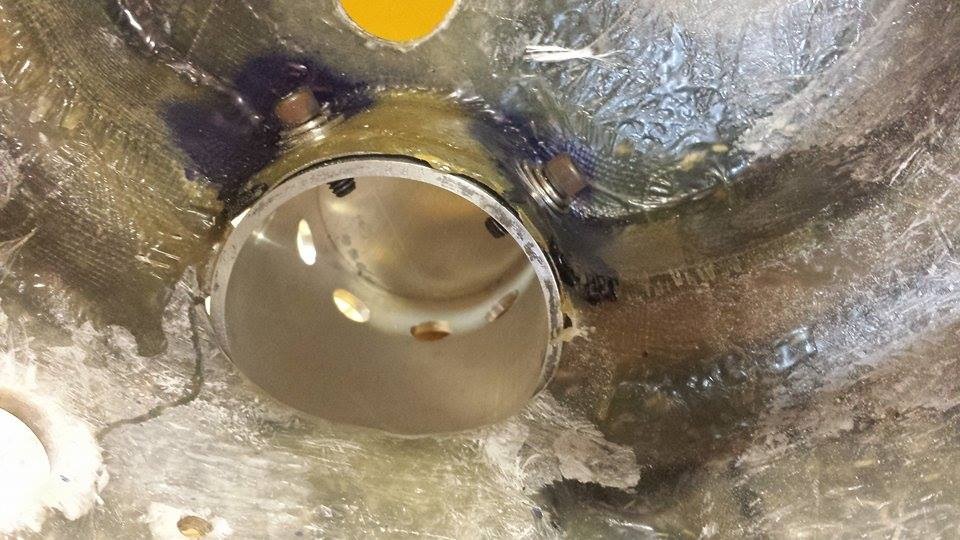 Use a piece of 22ga stainless (Home Depot) and form it around the N-filter. Leave an extra inch on either side for attachment to the shell. I'd also recommend drilling the pilot holes through the stainless before glassing it to the shell. Took all of an hour.
PssdffJay liked this

PssdffJay wrote:A question for the pros: how do you paint the shell when there is an aluminum n filter attached? Do you mask it off when priming and painting the shell and then mask of the shell when painting the n filter? I plan on using black etching primer for the metal parts.

I'm sure Julz can answer that question for you, since that's what he did with his parts...
-- Phil

PssdffJay wrote:A question for the pros: how do you paint the shell when there is an aluminum n filter attached? Do you mask it off when priming and painting the shell and then mask of the shell when painting the n filter? I plan on using black etching primer for the metal parts.

If I'm not mistaken, if you attach it like ejgunth showed in his picture, then it looks like it'd be removable.

Correct me if I'm wrong, but that was my plan.
-Casey

I also drew a line around one of the lenses to see how much space I needed to dremel out. It's thicker on the 2 lower holes by the n filter but you can see how close I'm getting to that cutout.
~Jay

Sans the n filter, all the other aluminum parts are now ready to be cleaned and painted. Pending any blizzards, that should be started on Saturday. I still need to do some sanding on the bumper but that should be good to go on Saturday too.

For the shell, I just need to grind out where the lenses are going, figure out the n filter, and then I can sand it and get it painted. It's going to be a close one but I'm staying positive.
~Jay

PssdffJay wrote:I did make some more progress today. I made 2 little templates so I can grind down the inside of the shell where the lenses will go. Just made from bass wood. I didn't get to actual grind anything, it got to late to start making any noise outside.

I'm interested in this step. Actual question and not trying to be rude, text always comes across the wrong way. What does this accomplish and why is it necessary?
Some men buy sports cars when they turn 40, I'm building a Proton Pack.
Proton Pack Build Thread:http://www.gbfans.com/community/viewtop ... 24#p475031

Hijacker wrote:It's so you can shore up the window cutouts and make them more uniform looking.

...and knowing is half the battle!

I had to do a bit in the power cell window but it should really be built up on one site. One side was very thin compared to the thicker side I dremeled out.

I'm curious though, how did you make your window jigs? I've been thinking on it and I can't think of a way to get them to the thickness I would I need other than with a belt sander or table saw.
-Casey

Depending on the thickness you need, I found different thicknesses of the bass wood at Michael's craft store, you may be able to find the same.
~Jay

A lotta bit of tape.

I did go with Letmebleed's method and used some quick set jbweld epoxy to tack it in.

Then used a whole tube of jbweld steelstik on it.

It stinks and sets up really really fast! If you use this, cut it into quarters. The last bit of my first quarter solidified in my hand as I was mushing on the other. Wear gloves too.

I used a Popsicle stick to stop it from coming out the other side.

I could still glass it in later but I need to do some cutting first. This bit of metal here by the arrow. I'm going to cut this out and hopefully it will allow that PVC piece of the e cig vent to fit in. I tried to fit it even before the steelstik and it wouldn't fit without modification of the PVC.

I think like the rest of you, it's going to have to stay on the shell. Not sure if it'll work attached to the mobo but I'll see when I cut the aluminum out.

I keep forgetting to cut out the mouse hole for the thrower loom. That's all I need to do and then I can sand and prep for paint.
~Jay

That side was actually harder to do because there wasn't as much of a gap as the other side.

I'm really getting excited now! 4 days left I can build/paint before Wednesday!
~Jay

It's gonna go so well with that beautiful pack!

One thing that annoys with EGB is the nighttime […]

Thanks for the reply! Yeah, I’m using the ha[…]

It is well known that movie props are often made t[…]