By TheBigGuy -  September 27th, 2012, 11:31 pm
-  September 27th, 2012, 11:31 pm#414810
So at the first meet up with the Portland Ghostbusters at Rose City Comic Con, I realized that EVERYONE had a PKE. I decided I needed something else to carry around by Halloween. And what's flashier than the Giga Meter? I've checked out a few threads and was greatly inspired by Midmichigun's kitchen mixer build, and decided to go that route. I picked up an old hand mixer at goodwill with what I thought was the closest shape to the mater's handle and body. I also went to harbor freight and picked up a fake dome style security camera as used in several other threads.

I also picked up a spinning LED toy from the Halloween crappery section at Wal-mart.

I went to a sign shop and asked for some scrap sintra (sheet PVC.) This stuff comes highly reccomeded from ZombieRepellent and I can already tell it is cool to work with. Best of all, they gave me a pile of scraps for free! I cut four pieces a bit larger than what I needed. I marked a line on one across that would separate the body from the dome section and used a heat gun to heat the line and bend the sheet to the approx. 14 degree bend as seen in AZSpidey's plans. I glued the second piece, heated, bent, glued, and repeated until I had 4 layers laminated together with the appropriate bend.

Traced the body of the mixer and the dome and ended up with this pattern. I then cut it out on my scroll saw.

Here are some of the pieces mocked up so far

Hopefully she'll be done for Octobers big day! (or preferably earlier, as I'm sure we'll find early events to appear at)

I just think the mixer is the way to go for making a gigameter. There is plenty of room inside, especially if you chew away some of the bakelite plastic, which makes it pretty lightweight.

Anywho, I am looking forward to your progress!
I have been having problems finding the spinning gizmo at the local Walmarts and Targets... guess I am just lost. But that being said, I did find a website that has them.... via Amazon.

By TheBigGuy -  September 28th, 2012, 10:58 am
-  September 28th, 2012, 10:58 am#414879
Yeah, they are cheap on Amazon! I would have gone that route had I not stumbled across them at wal-mart. Have you looked there since they put halloween stuff out? I find mine in the seasonal section, with some other, cheap, mostly lame halloween plasticy stuff. Bottom shelf. Not sure if that helps, but I would immagine Wal-Mart's merch is pretty standard across the board. They really are the leaders in supply chain management.

I think my ears are going to be static on this one, just because I have limited time, or I'm considering just operating them by mechanical switch or lever, so they will light up, but won't actually be motorized.

Thanks again for the inspiration!

By TheBigGuy -  October 18th, 2012, 12:17 am
-  October 18th, 2012, 12:17 am#418753
So my deadline for this thing has just moved from the week of Halloween to the weekend before Halloween, so I'm going to cut a huge corner by making my ears static. Hopefully I'll build one with moving ears someday (perhaps when I can spend more time nailing down the accuracy of the piece in general) But I think I'm going to be satisfied with this one for the amount of time I've put into it. It will give me something else to carry around besides a PKE. In an effort to add a bit of something interesting in lieu of moving ears, I will be using flashing red LEDs in the tips of the ears. We'll see how this goes.

Here are just a few more pieces mocked up. The spinning LED toy is epoxied into the back plate of the security camera dome but all of the other pieces are just resting and not yet actually attached to each other. About a week left, and too many other things to work on!

If you source some "boards" through Radio Shack, you will see that they have flashing LED's that change color. Nice little feature you may want to try with your wings on yours! I bought an LED that can change color, for something north of $3.00 and assume that the addition of a resistor to the control circuit is what makes it function... I haven't tried it yet, but figure it would be sharp to have!

Thanks for the color changing light idea. I have some blinking red led's that I plan to use for the wings, I'll probably stick with that for now as I'm basically out of budget for this build.

You may be able to give me an idea on this though... I have decided to make the display static (just because I am out of time and resources) by printing the black background of a digital display on velum, gluing it to the underside of a small rectangle of plexiglass, and back lighting it with a single LED. I used this method for the lighted dash of a 1/25th batmobile and really dug the effect. That being said, it seems like the display is just a red double digit display, though I can't find any pictures to back that up. By Star Trek VI, it had three digits, thought that whole piece of the prop had changed. Any leads on what it should look like? And if you had to choose digits for a static display, what would they be? (Purely your opinion)

By Midmichigun -  October 22nd, 2012, 6:50 pm
-  October 22nd, 2012, 6:50 pm#419576
Well, I am in the same boat... I have debated about the red digits tooo... That would be easy with some red dyed plexiglass... You could experiment with red permanent marker with a gentle buffing or solvent to get the right effect.... with heavy black outline of the letters for contrast. Or overlay with black electrical tape cut out to show the red underneath..... To make it "look" like it is reading... you could put 2 flashing LED's (one under each digit).... or as you say, just red lit LED's.

What I am trying to do, is "frost" over a bit of plexiglass with some acetone. I will then mount one of my flashing multi- color LED's under it. This should give it a pleasant glow on the display.... of "something".

PS- I ~might~ have a small piece of hot pink plexiglass that could work? Although, you'd definitely want some black paint or tape over top of that. Use a red led below and the color wouldn't be too obvious.

By TheBigGuy -  October 23rd, 2012, 12:35 am
-  October 23rd, 2012, 12:35 am#419624
Started really throwing stuff together tonight. All I have left to do is create the top lid for the top face of the cylinder section. The red LED's at the end of the wings blink (and not at the same speed, so they kinda switch between blinking together and alternating, like when you're sitting in the left hand turn lane, watching the signal of the car in front of you but listening to yours...) so there wasn't a good chance I would catch a photo with both lit. 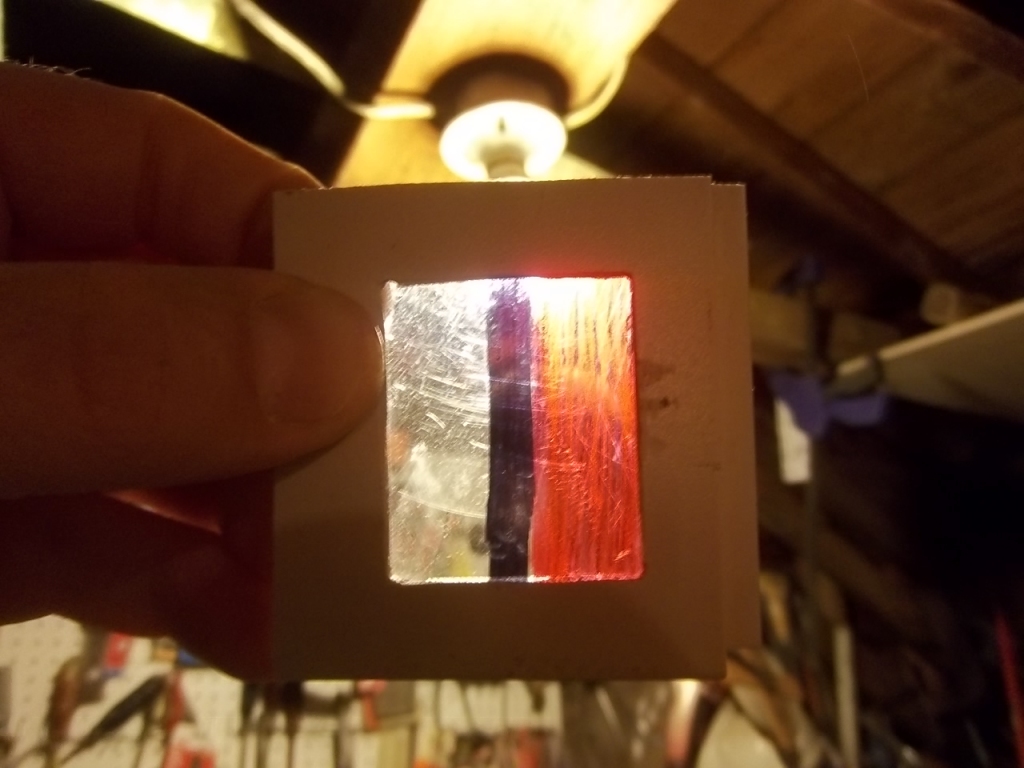 Eh... not super impressed.
I next bumped out to my next thought for you. This is a repair "panel" that I found at a Kmart's. I was looking for the lens repair tape, and found this instead. The problem is that it does have the wrinkled/ textured finish. But it also has an adhesive on it already. And is easily cut into shapes and letters with a box cutter and scissors. I have used this type before, in "quick and dirty" proton pack builds. The concept would be to once again surround letters in black, and have lights/ LED's shine through the red. 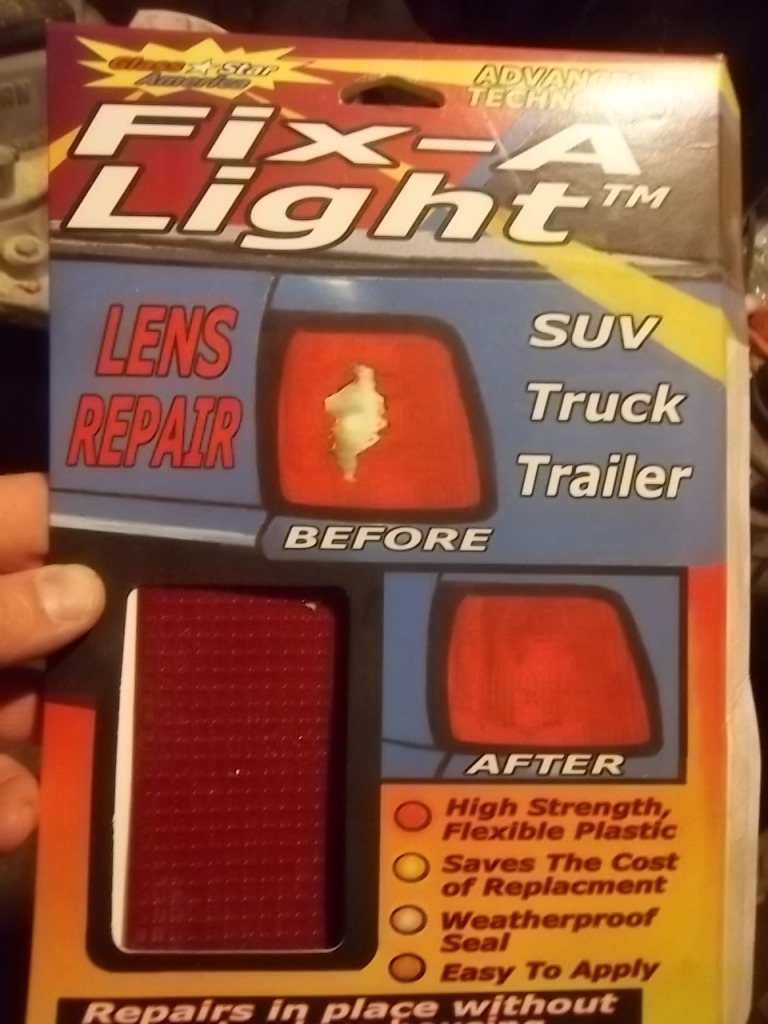 Even if these don't work for you... just some thoughts to ponder!

This is the full sheet of vellum paper.

And this is what one of them looks like with a single red LED back lighting it. I'm pretty happy with the effect.

attaching it to F9 is the biggest release for t[…]

This is so awesome!

Not much to report on this at the moment. Just wai[…]

For some reason I wasn't notified about your comme[…]