By Tyrael -  February 13th, 2014, 4:14 pm
-  February 13th, 2014, 4:14 pm#476504
Thanks man. I saw a while back you got a Makerbot and was curious what you or others would have to suggest about it. If I get one, I'm definitely going for the 2X for the dual extrusion heads so I don't need to worry so much about support material.
Twitter: @ThatNerdInATie
Don't quite understand Instagram yet, but...: thatnerdinatie

By Donatello -  February 13th, 2014, 5:35 pm
-  February 13th, 2014, 5:35 pm#476524
Having built and used a makerbot, this is not going to be an easy task. 3D printing is amazing, but it's far from perfect and requires so much calibration, tweaking, and finishing work that I decided not to go that route in my attempt at the giga. I can just imagine the layer print lines all over and I cringe. If you go the 3d printing route, definitely stay away from makerbot if you want anything halfway decent.

I'm curious to know how you're handling the dome. My way is accurate but it's very time consuming to make.

By Tyrael -  February 13th, 2014, 6:03 pm
-  February 13th, 2014, 6:03 pm#476525
As I said in the original post, I've got a friend that works at Stratasys who gets nigh-unlimited build material for his own projects as a job perk and access to their higher-end machines, so I'm thinking of getting a print from him to figure how to make a castable version. We'll see, though. Any 3D printed version would naturally require clean-up and filling/sanding.
Twitter: @ThatNerdInATie
Don't quite understand Instagram yet, but...: thatnerdinatie

pOOpTarT wrote:I have dual extrusion heads... And I took one off... I've found that the second head can drag on the work piece.
I only install the second tip when I am printing in two colors.

That's one of the beauties of the Stratasys machines. It has a toggle head assembly, and actually raises and lowers the active nozzle by a few mm depending on which one is currently printing. Just enough to stay clear 99% of the time.

Plus a tip wiper that removes excess plastic and keeps it clean and out of the way. 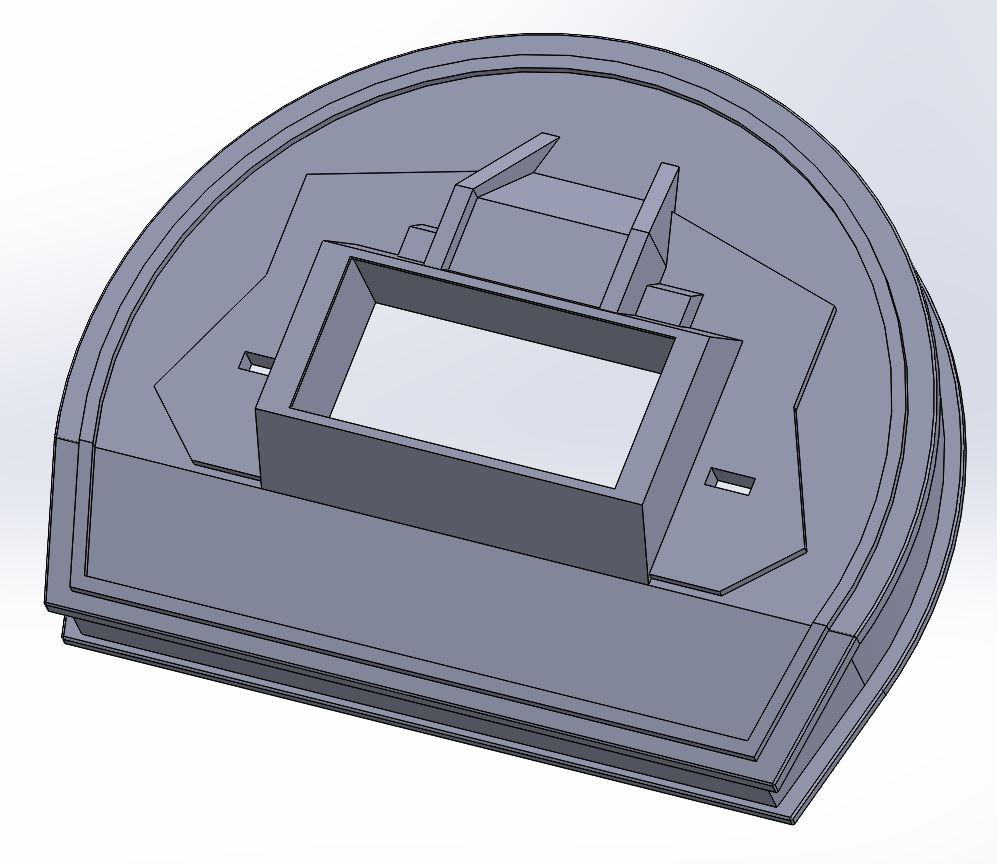 Donatello wrote:Perhaps I can get special permission to sell casts here since they are so hard to come by.

Although your aim is noble, I'm afraid we do not grant special permission to sell items when a seller doesn't meet the requirements.


Sticking around long enough and you'll have easily gotten two of the requirements in the bag, and if by your 50th post and 90th day you're looking to acquire a Supporting Membership, one can either be earned through contributing towards the community, such as editing the GBFans Wiki, or it can be purchased through the GBFans store.


Once all three have been gotten, we'd all be pleased to see you post a topic in the marketplace offering casts of your Redman.

By Krenzy -  February 23rd, 2014, 4:51 pm
-  February 23rd, 2014, 4:51 pm#478013
It's not restrictive, really. Your post count and time on the board let buyers know you intend to stick around, and a membership can be obtained by simply contributing information on the wiki pages; your info on the Redman buffer in the wiki could earn your membership.IIt'd be a shame to see a good product and potentially good seller refuse service on such simple grounds.
Tyrael, AJ Quick, Kingpin liked this
My Scratch Built Pack and Thrower: http://www.gbfans.com/community/viewtop ... 39&start=0

Donatello wrote:Yeah... I'll never meet these requirements. I'll find somewhere else to sell them. It's a shame gbfans is so restrictive on such matters. It took me about 6 months to find a redman and I would have killed for the chance to buy a cast.

Unfortunately, just because you have something... it doesn't give you special treatment above all the others who do meet the requirements.

The Redman Buffer isn't actually very rare. Not very many people have bothered making Giga Meters, so the demand hasn't been great. I had no problem scoring one on eBay years ago when the demand for them was still quite high.

Krenzy wrote:It's not restrictive, really. Your post count and time on the board let buyers know you intend to stick around, and a membership can be obtained by simply contributing information on the wiki pages; your info on the Redman buffer in the wiki could earn your membership. It'd be a shame to see a good product and potentially good seller refuse service on such simple grounds.

Getting back on topic, I haven't had any time the past few days to work on much of anything (7 month old baby and a daycare provider who decided last-second to not provide isn't very conducive towards getting work done). Did get a bit of cleanup on the display done, mostly getting rid of excess material and such.

In case anyone was wondering, the slots to either side of the display are sized for rectangular LEDs that go under the transparent half-circles on either side (near as I can tell, they look like halves of a frosted acrylic rod or something). The Star Trek VI version of the prop also had these on either side of its display, if I recall correctly. Either way, a similar piece for a ST6 prop would be very easy to make and if there are any requests for it, I'll be happy to draw one up.
abaka liked this
Twitter: @ThatNerdInATie
Don't quite understand Instagram yet, but...: thatnerdinatie

By Tyrael -  April 5th, 2014, 7:57 pm
-  April 5th, 2014, 7:57 pm#4788418
Just want to let everyone know that I'm not dead and that updates will come when I have something to report on. My job's kept me pretty busy and when I'm not at work, my kid keeps me pretty occupied. I've had almost no time to do much of anything outside of that since my last update, so my apologies for that.
Twitter: @ThatNerdInATie
Don't quite understand Instagram yet, but...: thatnerdinatie

I've got an inner dome modeled, mostly for scale. I may just have one printed anyway; I'm horrendous when it comes to making anything circular and it wouldn't be any more complicated than anything else in this build. 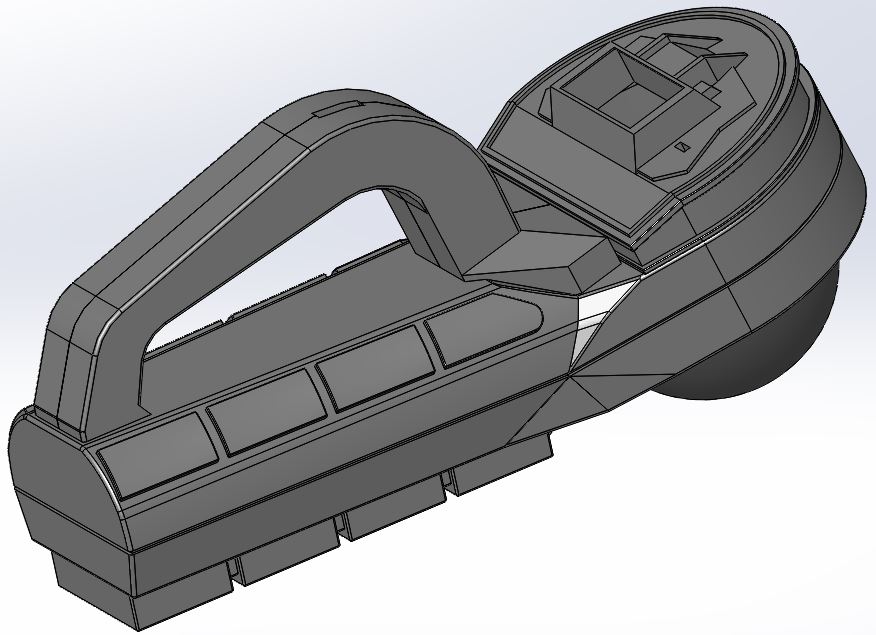 From another angle, which shows a bit of the interfacing I've added. 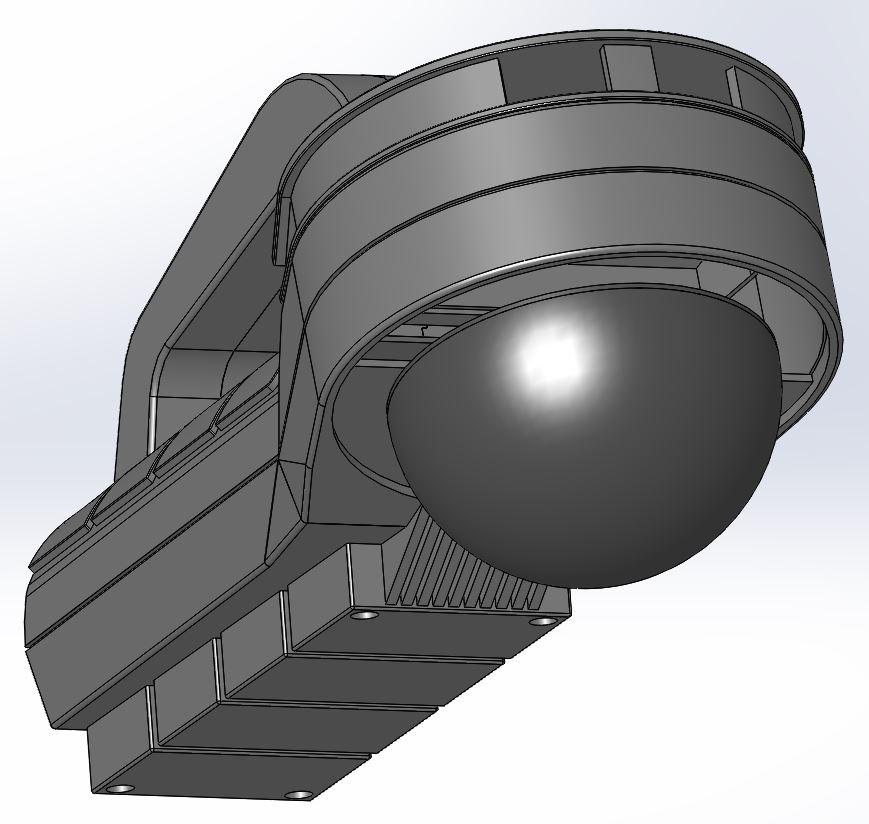 I also added a small mounting area for the speaker that will be a part of the electronics kit for the thing. Again, if anyone could help me make something in Eagle or a similar PCB layout program, I have the component and wiring diagram done and all it needs is to be plugged in and optimized for space. 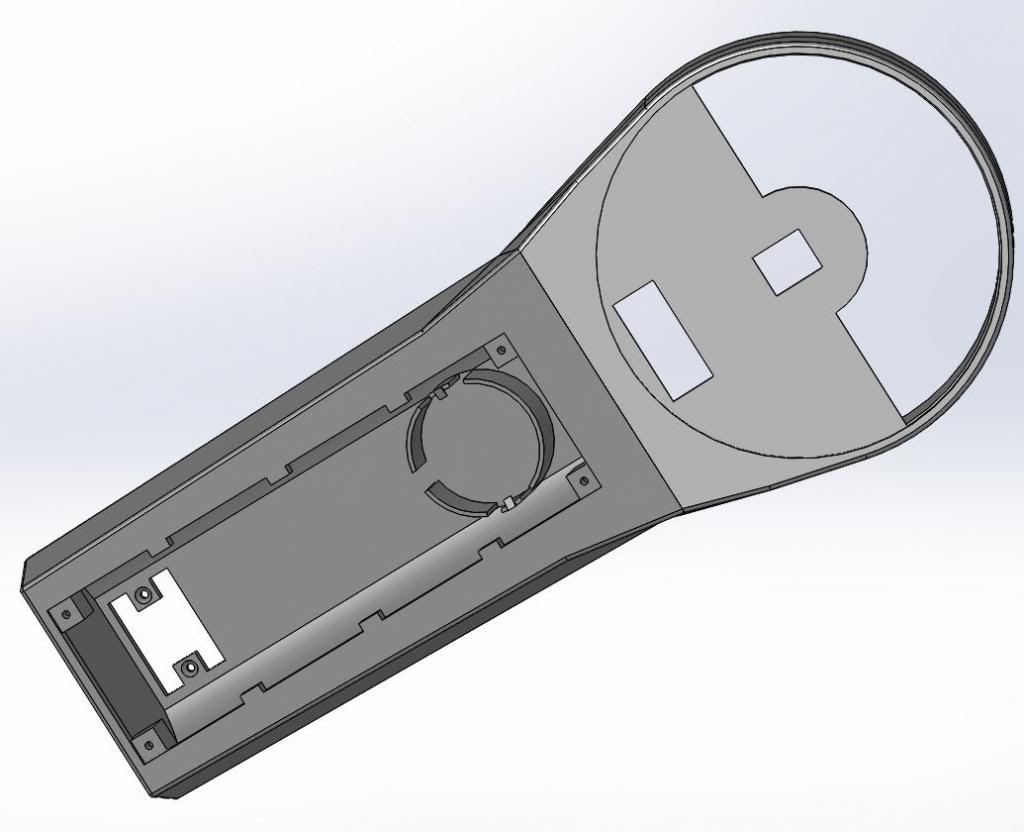 Right now my plan is to use a motor with a model kit wheel glued to it to propel the inner cylinder, which will be mounted to the phone cord detangler as seen in other builds. That will plug into the female plug from a phone wall jack, easily found in any hardware store, as shown below. I was thinking of using gears but I don't really have any on hand, though I could try to model them, I suppose. 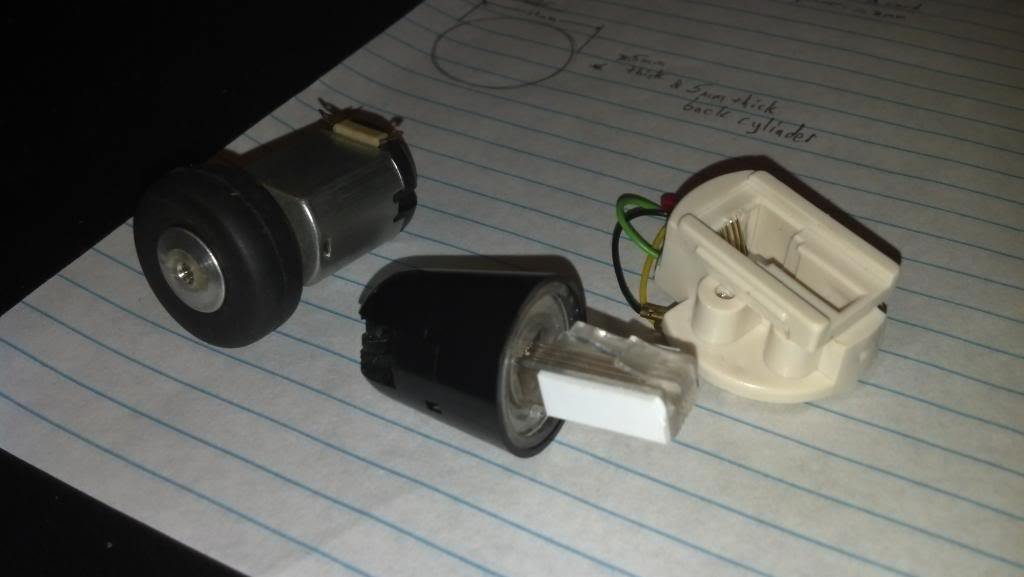 Came out pretty nicely. Just gotta add a couple holes and it's good to go. I will likely end up modifying the base file to accommodate the servos I'll be using to move them.

By Tyrael -  May 18th, 2014, 4:38 am
-  May 18th, 2014, 4:38 am#4793682
Welp, the files have been sent off to my buddy in Michigan who works for Stratasys. I did some quick updates to the assembly file and some minor edits to the front cylinder and microphone heads, which are now two pieces to allow ease of installation for LEDs and loading into the display part.

Now for the waiting game!
Kingpin, SlimeGuy, Borzou and 1 others liked this
Twitter: @ThatNerdInATie
Don't quite understand Instagram yet, but...: thatnerdinatie

Either way, this is how I feel after working on the models for so long and my buddy telling me there should be no problem printing this thing out:

Tyrael wrote:Took a while but my friend assures me that the parts will be made this week. At least I've got time to work on the smoke module for my proton pack... 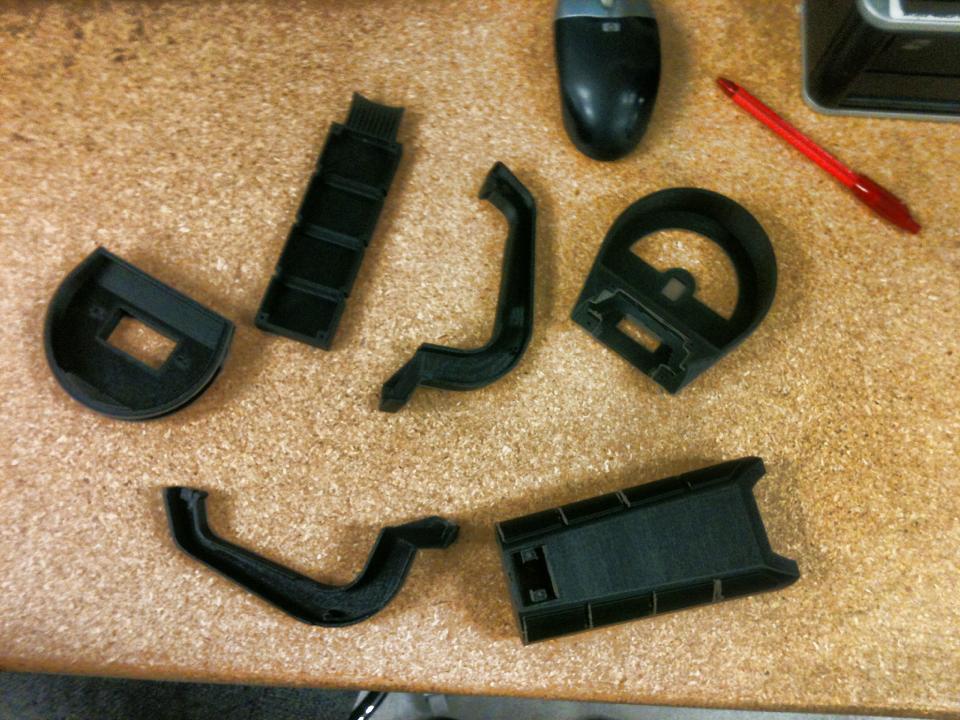 Aw, yeah. My body is ready.
Rafaed, Kingpin, Borzou and 1 others liked this
Twitter: @ThatNerdInATie
Don't quite understand Instagram yet, but...: thatnerdinatie

One of a half-dozen circuit boards I've come up with in the past week. The rest are for a different project that will see progress in the next few months or so. Stay tuned.
jackdoud liked this
Twitter: @ThatNerdInATie
Don't quite understand Instagram yet, but...: thatnerdinatie

Just a heads up, I see you have quite a few vias in your circuit design. I don't know much about your circuit, but those can tend to add quite a bit of capacitance and screw with signals if you have too many of them in a single path. It may make the board look less clean, but you may want to move around a couple of the components to decrease/eliminate as many vias as possible.

You'll also want to beef up (widen) any power traces and look at using a ground plane on one of the layers (assuming you're only using two) to eliminate potential ground loops. Again, not knowing much about your circuit makes it hard to know if you've already accounted for this or not.

Long story short, yes it was both a combination of[…]

Dan Schoening posted the textless version of the v[…]