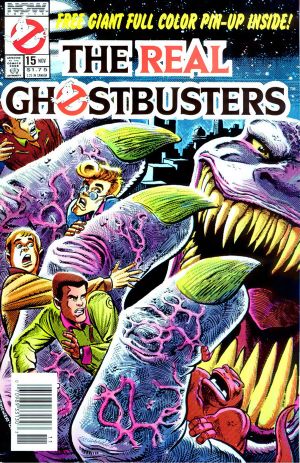 Featuring such luminaries as writer James Van Hise and artist John Tobias, Now Comics began to develop further adventures for the real Ghostbusters, based on the smash-hit cartoon series. Over the course of it's run of 32 issues the series would see the return of many familiar faces from the show as well as bring in fresh (for the dead) ones.

Not only that but concealed within the fan pages are the late 1980s and early 1990s counterparts of some of the most well and widely regarded figureheads of today's Ghosthead community.

The series was released in the traditional monthly format, and whilst it enjoyed a successful run it suffered a drop in popularity which reflected the state of the cartoon, culminating in a number of issues never being fully coloured and a story ending on a cliffhanger before it could be resolved. This period was also noted with reprints of stories that appeared in the Marvel UK Real Ghostbusters comic as well as cover artwork from the British equivilant.

A series of annuals were released to complement the series, reprinting a number of the adventures already seen in the singular comics.

In 1989, concurrent with the regular run of the series, the same creative team produced a three issue mini-series adapting Ghostbusters 2, but using the animated likenesses. The mini-series was later collected into a trade paperback.